Socialbee is an internet platform that aims to create a sustainable culture of youth volunteering engagement. It focuses on facilitating the building of social relations and communities among the users, aged between 18 to 35 (target audience), who share close interests, activities, backgrounds, or real-life connections.

The Socialbee logo was designed by Mrs. Keti Tserovska in 2016. The logo was awarded on several design contests and it was presented on the prestigious conference – The Falling Walls, Berlin, November 2016. However, after identifying the brand mission and vision, a thorough research was done in order to explore the Socialbee competitors. After getting familiar with the company competitors, the main symbols were identified by using their semiotic meaning. 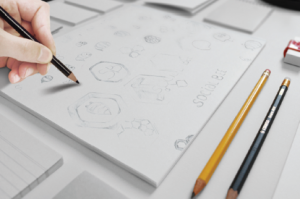 Then, several options were produced by incorporating the same symbols. 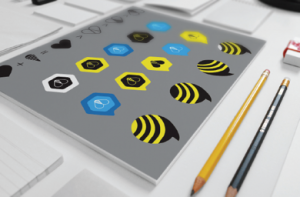 Once the paper sketch has been done, the corporate designer designed the trademark in Adobe Illustrator by using grid in order to be absolutely precise. Furthermore, the Golden Ration was used here – the ellipses interact between each other by setting an angle of 23.45° which is equal to the Fibonacci number: 1.618 which symbolizes sustainability and perfection.

However, you can see the final outcome (with grid) bellow: 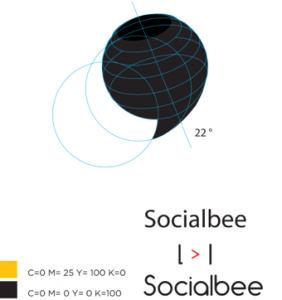 Our graphic designer took into consideration the nature of the selected font and manually set up a visual balance by giving certain space between the letters.

Finally, the corporate designer had to define the logo usage. 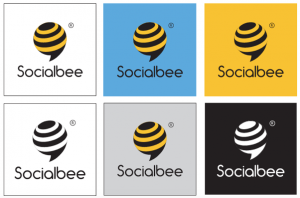 To sum up, the Socialbee logo meets all requirements that a powerful logo should reflect: it is a scalable, easy to reproduce, memorable and a distinctive trademark. If it is enlarged, it can be reduced significantly not only in colours but also in black and white so that it can be faxed, photocopied and etc. In addition, the Socialbee corporate mission and values are communicated through a powerful symbolic meaning which is incorporated into the logo by using certain shapes, forms and colours.